Lisa is originally from Kilifi, Kenya. In 2011 she received an Aiducation Scholarship. After doing her Bachelor in Kenya and working for some years, she started last year her Master in Switzerland. In the next few months, she will write some blogs about her impressive story. Today you can read about her first trip to Zurich, where she met the first time the people behind Aiducation Switzerland. Enjoy the reading and look forward to the next blog posts from Lisa, where she talks about her life from 2009-2019 in Kenya.

I am definitely not a morning person but on this particular day I was awake by 6am. I was very excited for my first official trip to Zurich courtesy of Aiducation Switzerland. The train trip took around two and a half hours from Lugano to Zurich. The scenery and beauty of the journey calmed what had been a week of amassed nerves. On reaching Altstetten Mr. Matthias was at the station ready to take me to the office to attend the annual close of the fiscal year event. A brief back track and introduction, my name is Lisa Mwaiseghe an Aidu alumnus, a recipient of the Aiducation scholarship that completely changed my life. I am currently pursuing my masters at the University of Lugano and the story about this is a whole other blog that will follow after.

After a quick tour around the office with Matthias, he proceeded for a board meeting with the German chapter as I acclimated myself to the new environment. In this time Mr. Florian the co-founder of Aiducation walked in. It had been such a long time since meeting him and it was such a great pleasure to do so. What followed was the annual end of fiscal year board meeting for the Swiss and Umbrella chapters, which I was privileged to join. It was such an eye opener for me, in so many aspects but what stuck with me was the heart and passion that is put in to future planning, budgeting and working things out in order to have successful academies, more sponsorships and also just operational functioning. In this meeting I met as well more incredible people who put so much work to make a positive impact globally.

At around 6pm the guests started to arrive, (AiduMakers, AiduPartners…) for the evening bit of it. I was going to present my story on how a young girl born in Kilifi the coastal part of Kenya was now in Switzerland. I was quite nervous as I was definitely out of my depth with regards to talking in front of a group of people. Matthias really helped because he led the conversation so well. For me it was such a reflective moment because most things were coming full circle. It was retrospective and surreal to be able to journey back with the audience on all of my 26 years of living, it’s a moment I will never take for granted. After sharing my story, Matthias gave some final remarks and then it was time to just mingle and interact. I met really nice people and had different interesting conversations and an incredible time with so many different people. 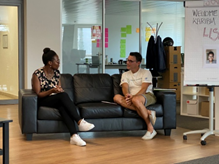 I was hosted by Alice and Michel a very lovely couple if I could describe them with one word it would be gracious. For the five days that I was in Zurich, I was offered a warm place to sleep, fed the Swiss way, and just had amazing conversation with people at the top of their fields with such great minds but also very humble. Sunday morning Alice and I went out for yoga at the park it was quite an experience, I loved it. We later came back for brunch it was really nice to prepare the meals and the variety of Swiss cheeses, breads and cold cuts, delicious. Afterwards Alice took me on a tour around Zurich from the main train station to the river Limat and river Sihl that flowed to the lake where families and friends had set out to just relax next to and in the waters as they enjoyed the sunny summer day. We went to the old town of Zurich where I saw the old buildings, walked through the parks and went to the famous finance street Paradeplatz as Alice explained to me the integration of what was the beautiful city Zurich. 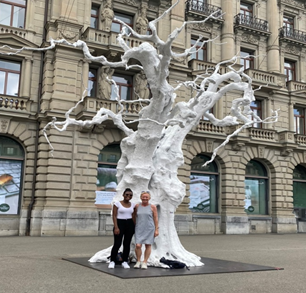 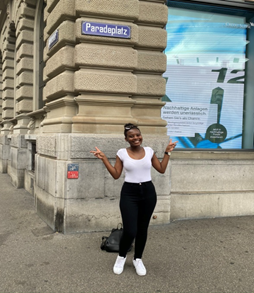 Monday morning I met up with Maya we took the train to Dielsdorf for a meeting with the Rotary club. Dielsdorf is a town in Zurich really quiet and scenic. It was a lunch meeting at the hotel Taverne where the group was holding their annual lunch. Maya and I were presenting on Aiducation and the great impact it had on the children’s lives and I was there as one of the impacted lives. I took a quick survey of how many people would be attending and it was about 12-17 people (yes I am very precise). After every one had arrived we were briefly introduced and Maya walked to the stage as I stealthy followed behind. She presented really well in fluent Swiss German and it was definitely a “tough act” to follow but I was getting used to the stage and there is an ease that comes when you are honestly sharing your personal story. When we were done I got a couple of questions one that I still am reflecting and sitting on, what followed after was a hefty lunch that I struggled but eventually powered through and finished contrary to Maya’s expectation J We were later on presented with gifts and after a quick interaction we were on our way back to Zurich main station.

That evening Alice had invited a few of her friends over for a nice dinner with wonderful ladies doing lovely work in their spaces. We cooked, ate, laughed and just had amazing discussions on women in the corporate and entrepreneurial life, travel, upholding your values in top positions and the balance of it all as a woman. It was such a great ball of wisdom moment and I wanted to just seat and marinade in it as I absorbed all that I could. I am glad it happened because out of this I made really new friendships that I hope last for a long time. 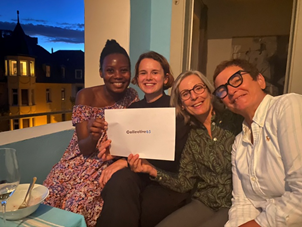 Tuesday was the second last day of my 5 day trip in Zurich and I was spending the day with Matthias and his family. By this time I had fully accustomed to Zurich in my head and I confidently walked to the central station from Alice and Michel’s home. I took the tram which stopped at the stage I had been instructed by Matthias, and I proudly waited to meet Matthias and offer him a side look for not keeping up to Swiss timeJ He came with his adorable two boys who were full of energy and in that moment I knew I would be offered the am a parent excuse for being late which I whole heartedly ate up. Anyway after a short train trip we went for a short hike up Uetliberg where I was met with such a spectacular panoramic view of Zurich. After taking all that in we slowly hiked back down to the train station and headed to the park then Matthias’s home for an evening barbeque. Matthias and Marsha welcomed me very warmly to their beautiful home where we enjoyed a lovely barbeque dinner and time together. 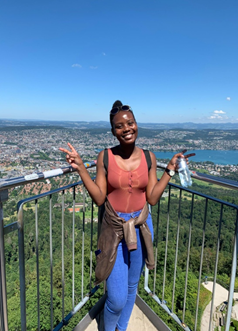 My final day in Zurich arrived; Matthias had an early morning meeting which I was to accompany him to. Michel dropped me at the train station that morning, I met up with Matthias and we took the train headed to Uzwil. We were going to Buhler a big agricultural company, the meeting was to discuss and plan on a possible academy that is to take place in Kenya with regards to food growth and the whole supply chain system. The meeting was successful as I encountered a Kenyan as well working for the company and we shared amazing conversation. After this we were back on the train to Zurich station where I took my train back to Lugano.

On my trip back to Lugano I just reflected on the amazing 5 days that had been. The new things I saw, the amazing people I encountered and the experiences and new memories that I formed. I can take stock of the 3 main things I learnt from the trip; the first would be the power of sharing one’s story, this is for both the audience as well as the person. For me it was a retrospective moment and walking down memory lane until my current season just reminded me of the hurdles and also the reasons behind some decisions consciously or subconsciously made. The second would be the importance of new experiences, I am very introverted, 2019 and 2020 have been the years that I really took a leap of faith and completely stepped out of my comfort zone and these new experiences have forged life changing moments. The third and final point is the vitality of meeting people and basically networking, I am a strong believer of divine connection and people who are placed in your life for different influence and to show you different perspectives. It would be very safe to say “Zurich, I came, I saw and I conquered.”