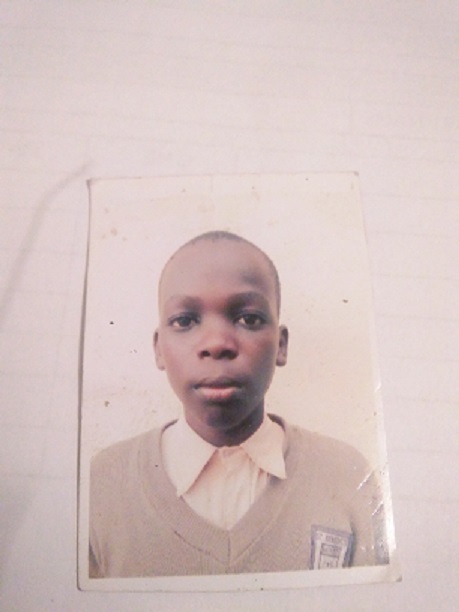 Moses Kanyango Odhiambo comes from Homa Bay County, Nyanza Province, Kenya. He was born on 27th March 2005 and he is the first born in a family of five siblings. Moses went to St. Benedict's Primary School in Kisii County where he sat for his Kenya Certificate of Primary Education in November 2019 and scored 402 marks out of the possible 500 marks (therefore being among the top 1% of all students in Kenya). Indeed this was an excellent achievement considering the many challenges he faced during his time of studies, financial difficulties being one of them. He is naturally talented in music (gospel singing), art and design (drawing and painting ) besides being academically bright. His studies at the primary level was offered free at his primary school due to his many talents.

He was selected to join Form One at Orero Boys Secondary school in Homa Bay County, but due to the financial problems, his family didn't know of where to begin from and was left wondering if the dreams of their son had been shuttered. Luckily enough, his family heard of Aiducation International Kenya Scholarship for high potentials. He applied for the scholarship and got selected for an interview at Kisumu Boys High School on 19th December 2019. Unfortunately for Moses, Orero Boys Secondary School is not yet one of Aiducation's partner schools and he would have to quickly seek a transfer to one of the partner schools should he wish to be considered for a scholarship.

The Aiducation International Kenya Scholarship was the only hope for Moses and his family. As the admission day for high school students was approaching, Moses was severely withdrawn and depressed because non of his admission items had been bought for him with only hours remaining to reporting day. Unfortunately too, he had requested for transfer and admission at Agoro Sare Secondary School which is one of the partner schools for Aiducation Kenya on 18/12/2019 but it was not effected. This was confirmed by a visit to the school by his parents on 9th January 2020 and 10th January 2020. The school had agreed to admit him but later changed since all  the available chances had already been taken by the time of their request.

Without a partner school, Moses would not be considered for a scholarship and even worse, he would also not join Orero Boys Secondray School because the parents couldn't afford to pay for his fee at all. Instead, they could only seek admission at any county public mixed day school. His world shuttered. Without a good secondary school, chances at Moses achieving any of his dreams or exploring many of his talents grew thinner and thinner.

Moses and his family had so much hope in receiving the Aiducation Scholarship that they didn't try any other avenues. They always believed that through the Aiducation International Kenya Scholarship, Moses would be able to realize his dream of becoming a neuro-surgeon.

In the meantime, at Aiducation, the scholarship department led by Talents Manager Lazarus Othieno had already vetted the new scholarship applicants and actually considered Moses Kanyango as a prefinance candidate from his very strong application. Prefinanced scholars are awarded a scholarship before they receive an AiduMaker so that they can start school as Aiducation continues to sell their application. Usually, prefinanced scholars are highly deserving candidates with a strong application, strong leadership potential, a vision to give back to society and very good marks in their KCPE. Moses was such an exceptional student.

Due to the continuing distraught with Moses after not securing a chance at Agoro Sare, his mother decided to contact the Aiducation Kenya office for advice and further help finding other partner schools. The family was heavily worried and deeply concerned for Moses who was now very sad that he would probably not join secondary school at all. To their surprise, it turned out that he was actually a prefinanced scholar and even better Aiducation was able to secure a slot for him to join Butula Boys High School, which is another well performing school in the region.

We are overjoyed for Moses and wish him all the best as he starts school in January 2020!

Mother's reaction after being contacted about the good news, "The scholarship has now brought back a lot of joy to the family and Moses can't wait to join form one next week. Thank you so much Aiducation!"