A rainy evening in London – as usual during this cold season. On this grey Thursday night, Bryna, Lynda and Ben meet for the first time – a dinner for three which will be the beginning of our new blog series.

The girls have been in London for a few weeks working in the tax (Bryna) and the legal (Lynda) departments of Swiss Re. The place we choose for dinner was a burger restaurant which encouraged us to “Vote Rump” – just as the name of the restaurant. Throughout the evening, our conversation breached all kinds of topics – from working and living in London, over differences between British and Kenyan people, to Aiducation’s work in Kenya.

Ben: What did you think London would be like before you actually came here?

Bryna: I was not sure, but the picture I had in mind was of a very fast moving city with a lot of people under time pressure. This most probably is because I spent two weeks in Switzerland and back there, everybody is very concerned about time. 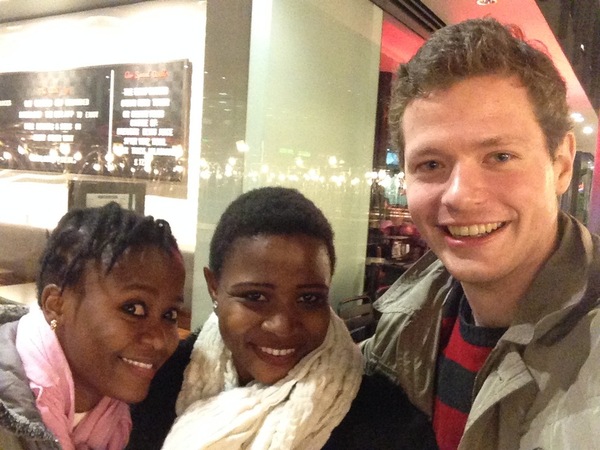 Ben: Now that you are actually here, how is London for you?

Bryna: Actually, London is just like Nairobi to me. In terms of the population it is very similar and the morning hours are just as busy as in Nairobi. I get the same feeling here as I do in Nairobi, namely that people are constantly under pressure to get to work and back home in the evening. For me the big culture shock came much earlier, when I moved from Mombasa to Nairobi. That took quite some time to get used to life in Kenya’s capital. There the difference was much bigger for me than moving from Nairobi to London.

Lynda: To me London is two steps faster than Nairobi. And yes, London is as cold as I expected it to be. What really surprised me about working in London is the sheer amount of bureaucracy. Although the UK it among the countries with the best technology in the world, it is still faster to top up your mobile phone in Kenya than here in London. Also, when you call to ask for a service, you sometimes have to wait for two days to get an answer.

Ben: Coming to London for one year is a big step. What was the main motivation for going on such an adventure?

Lynda: That is a hard question… Well, first I wanted to gain some international exposure. And I think London is a great place, because it is very cosmopolitan and you have a little bit of everything here. My boss is from Greece, my manager is from Switzerland and I am from Kenya. So you have people from everywhere. This gives me that international exposure I was after. Second, I always wanted to join the corporate world and do corporate law when I grew up. And it is interesting, because I am not just working for a corporate, but also for a big corporate company. So it is not just interesting for me personally, but it is also aligned with my career goals.

Bryna: For me it was very specific already when I did my application for Swiss Re. I knew I wanted to do something with agricultural insurance, because I was interested in this topic. So basically similar to Lynda, I see this as a first step in the direction of the career I want to pursue.

Ben: You have now been in London for three weeks. What do you like most and least about the city?

Bryna: What I like most about London is the great public transportation system. The tube system and the buses are very reliable and very convenient. You can actually count on them to arrive and take you where you want to go. Of course they are not as good as Swiss trains… (laughing) I hate the amount of smoking in London. In Kenya, people do not smoke as much as they do here and I seem to be passively smoking here quite a lot.

Lynda: There is a word that has become very popular in our vocabulary, both mine and Bryna’s. It is called “adulting”. For us this is the processes of growing up and being an adult. And I will give you the positives and the negatives of it. Positive for me is having moved out of home and come to a new place where I have to make my own choices. This includes paying your bills and all the other things you do not have to do when you are at home or not an adult yet. This whole process has given me independence to an extent where I cannot call on someone else to do something for me. On the flip side, adulting has been difficult because of the bureaucracy here. In theory you are getting paid by the company, but for that you need a bank account which I did not have. To get a bank account you need a national insurance number which I did not have as well. Also, without a national insurance number, you cannot get easy access to a doctor or rent a house. Organizing matters such as the ones I just described are tough, but are a necessary part of adulting and let you grow in the long-term. So on the one hand you are really happy that you get this chance to be independent and manage your own life, but on the other hand you just think of how much easier it would be at home where everything is taken care of for you.

Ben: What do you miss most about Kenya?

Bryna (without hesitation): The temperature! It is way too cold here. The temperature is always good in Kenya and it is something you always look forward to when you are abroad. Especially now that I am in London, I realize that I took the weather for granted back home.

Lynda: Many things. Food the most. As a foodie, you just have to miss food the most (laughing). And then obviously the people such as family and friends. There are many things. I certainly also miss the weather and the beaches.

Ben: Now it is your turn to ask me a question. What do you want to know?

Ben: In terms of the programme, I believe that what Aiducation has built up is something which actually adds value. Having grown up in a very comfortable and secure country, you do not always appreciate what you grew up with. Having worked for Aiducation now for a couple of months and now having had dinner with both of you, I can see the actual added value Aiducation has been providing. Considering that this programme has been running for less than ten years, I think it is fantastic what kind of impact it has had so far and what kind of doors it has opened for many, many people. Also the whole concept of working together with the Aidualumni and the different academies shows me that this is a programme focused on sustainability. And hopefully the programme will be continued so long that it will be common practice for every Aidualmni to support new Aidufellows when the alumni enter the workforce.

In terms of the people, I knew that Aidufellows were absolutely fantastic academically and intellectually. For me personally, being intellectual though is not always positive, because you might be lacking on the social side. So before meeting you, I was not sure what I should expect (big laughter from Bryna and Lynda), but now I can see that my fears were completely out of place. And I think that support by Aiducation successfully takes into account both the intellectual and the social side. Yes, academic scores are very important, but in the end it is personality which decides how successful you are in life. I am absolutely amazed at how well you have embraced the challenge London is offering you and I know for a fact that I had more troubles moving to Shanghai last year than you are having now. Well done for that.

The third question – what does it mean for me working for Aiducation? For me, this means giving back. I grew up in a household where I never had to struggle financially and where my family gave me all the opportunities I could ever have wished for. For me this is a way to have an impact and not just continue on with the career I have been following ever since joining university. What is really nice about meeting you is that I can now put a face to the work I have been doing. This creates a bigger emotional connection and increases the motivation to work for Aiducation. It has not changed anything in terms of why I am working for Aiducation, but much rather has reinforced my original motivation.

SORA - A NOMAD IN BASEL