“It was a blessing that Pathways came to my high school [in Manila] because my father lost his job before I finished my first year of school.” Even when Sheila’s father still had a job, she used to walk to school for lack of money for public transportation. But thanks to Pathways, Aiducation’s partner Organisation in the Philippines she could continue high school at what she calls “private school conditions”: Her mathematics, English and science skills were honed in advanced classes and she grew her self-esteem through acting.

Pathways then covered the fees for the university entrance exams and Sheila passed all seven exams she took. Not one to bask in pride, she humbly says “I was well groomed by Pathways”. Following in her father’s footsteps, Sheila chose to become a civil engineer at University of Santo Tomas in Manila. With a university scholarship, support from Pathways and some money from her father’s overseas job, Sheila financed her tertiary education. Again through Pathways, she gained skills to manage stress or speak in public and the dedicated student passed her degree with flying colors. 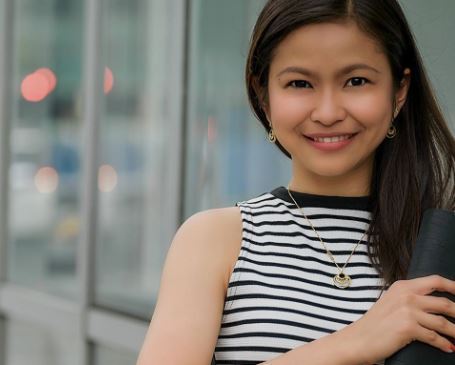 Today, Sheila is 26 years old and works as a procurement officer at a large water utility company in Manila. There, she handles the tendering of projects to the most competitive bidders and does everything from evaluations over presentations to top management to preparing contract documents. “My work goal is to learn and be the best I can in the projects I’m assigned to.” We have no doubt she is succeeding in her mission!

In June 2016 Sheila attended the first Swiss Re Startup Academy in the Philippines and her startup idea won over the judges. She is still in the process of working out its details, but hopes it can one day offer engineering support services to clients to ease work, time management and penalties for missed deadlines. We wish her all the courage it takes and look forward to following Sheila through her future adventures.

Sheila (on the right) with her start-up team at the Swiss Re Start-up Academy proudly presenting the first prize at the academy’s competition.