GOODBYE, NICOLAS - WE WILL KEEP YOUR LEGACY ALIVE.

On Friday, 13th Mai 2016 we all got together for a green memorial and remembrance event in honour of our our friend, aiducator and mentor Nicolas Nägeli who passed away on 19th March 2016 during an alpine mountain tour on the Aletschhorn glacier.

Around 130 people gathered at 3.30pm on a beautiful hill in Zürich called the Hasenrain in Albisrieden. Around 40 people spoke about their personal connection and impressions of Nicolas and about his impact in the world. During this time he became very close and real once more.

The tenor out of all the speeches was, that Nicolas was an amazingly talented human being – he had the gift to touch people deeply, to bring people together, to meet everybody with the same humble and honest respect, to give warmth were it was most needed (his hugs were genuine and heartfelt). He achieved in his short life so many things – all present and all people who have been given the chance to meet him will keep his legacy alive.

During the whole time it was raining – a cathartic and cleansing experience – during these intense two hours we came so close to Nicolas and to nature (the thing that he loved so dearly).

For Aiducation Nicolas achieved to secure more than 50 scholarships. Through him 50 individuals were given the opportunity and will help build a better Kenia and a better Philippine. During the academies Nicolas inspired many young people and his house Maison du Bonheur in Zurich hosted many visitors from Kenia and the Philippines and was open to all. 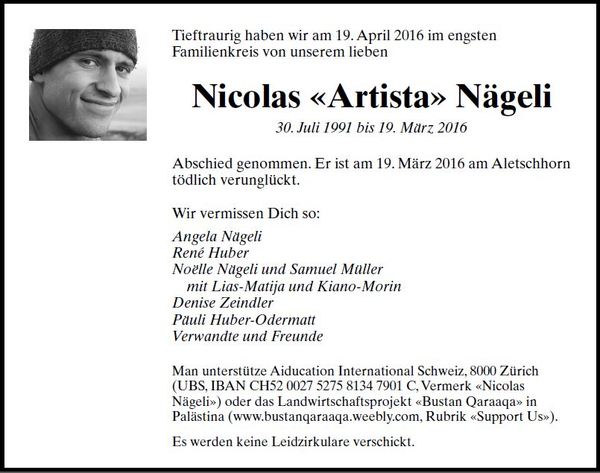