THE PREDICAMENT OF THE PHILIPPINE PUBLIC SCHOOL SYSTEM

n the Philippines, for every 100 students that enter first grade, only six proceed to secondary school where four will graduate and out of which, only two proceed to university. In a country whose population recently hit the 100 million mark, how is it so that only 2% of the people go on to university? The simple answer really is that while talent is evenly distributed, sadly, opportunities are not.

There are many problems plaguing the Philippine public education system such as the lack of ample classrooms where usually 60 to even 80 to 100 students are crammed in a classroom built for 40; the lack of good teachers as many opt to flock to other countries to seek higher wages and better lives and the lack of textbooks – students have to share textbooks, if their schools are fortunate enough to have gotten hold of any. It will take time and a strong political will to even begin confronting these. Unfortunately, in a country where most of its politicians come from elite families who have never experienced any of the scenarios mentioned, these issues thus continue to remain on the sidelines. 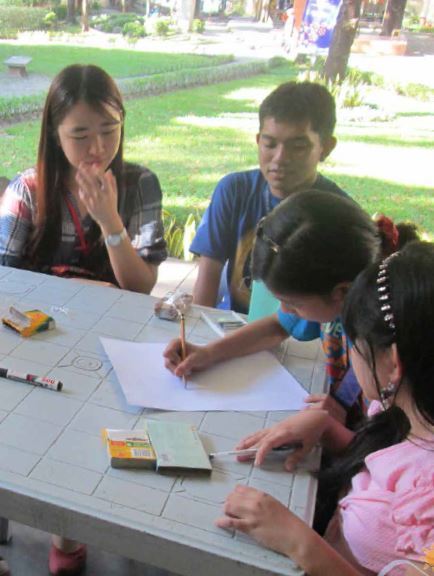 Students answering an exercise during the Aiducation-Pathways mentoring .

And yet, despite all the challenges in public education, the fact remains – there is immense talent in public schools. So why then are they unable to make it to university?

Two main reasons are the lack of awareness on the college application process as well as the lack of academic preparation. Granted that these students are talented, compared to their private- school equivalents who enjoy better teachers, first-rate resources and smaller class sizes, the public school students are already losing out. In addition, private schools have supplementary resources and services that public schools just cannot afford at this time. Guidance counselors shepherd private school students through the college application process, while public school students are mostly left on their own. This alone already greatly puts public school students at a disadvantage This is what we in Pathways calls reverse marginalization – where students, precisely because they are talented, are also often overlooked – not because the system does not care, but because there are just so many more pressing issues to deal with such as non- readers, drop outs, malnutrition, etc.

Another reason is the overall lack of financial means. Given very meager family incomes, they simply cannot afford the application fees to university. This therefore already prevents talented students from progressing to university. All these contribute to the students’ lack of confidence as they do not feel they are “worthy” and can compete with their private school counterparts.

Hence, students like Archie Dolit do not stand a chance. Archie is the eldest of seven children. His father is a street vendor and his mother, who was unable to go to school and thus cannot read nor write, takes in laundry to augment the family income. Archie graduated Valedictorian of Marikina High School. One would think that would be enough to open doors for him at university. However, his father had already told him that he would not be able to support him should he decide to pursue higher education. The meager family income of approximately $3 a day was already inadequate to support their family of 9. There really was no money left for anything else.

“Pathways to Higher Education – Philippines” understands that the current gaps in public education make it hard for public school students like Archie to compete with their private- schooled peers for admission to university – which is the first step towards a better future.

Pathways thus acts like a “talent scout” where we identify talented but underprivileged public school students and equip them with the necessary academic and formative skills they need to nurture them into the leaders who will work to better the country and the global community. A key component of our program is the Pathways Trailblazers leadership curriculum which begins with self-awareness that gradually progresses to citizenship and ultimately leadership. Mentoring and praxis are also central components of the program.

It’s a long and deep engagement, but we have remained committed these past 13 years because we truly believe leaders are made, not born. And that it takes time and effort to raise them.

Learning From Each Other, Building On Each Other’s Strengths

When we started Pathways (and to this day), no similar program existed in the Philippines. There are scholarship-giving organizations, but they usually come into the picture after the students have been accepted into university. None tried to proactively bridge the gap to precisely help more talented but underprivileged students get into university. Moreover, none aimed to develop their potential to lead.

Finding out about Aiducation’s aim resonated so much with Pathways’ own work. It was amazing how similar we were! Eventually as I got to know the rest of the team, I found all of them to be passionate, dynamic young people who were committed to the same cause as we were. That certainly made us feel less alone in this undertaking. And as we discover how we are more and more alike, we have also given a renewed sense of passion for the work that we do.

As we continue to share experiences and learn from each other, I am positive that we can build on each other’s strengths to reach out to more talented students in different parts of the world. Together, we can achieve greater impact at a quicker pace too. And who knows, we might just be able to see the world as a truly better place within our lifetimes.