“I want to become a role model for future children.” These are the words of Esther W., a bright young lady from Nairobi, Kenya – our 500th AiduFellow. Just a little while ago Esther’s faith was unclear. Despite her great marks in elementary school the 13 year old was far from sure if she would continue her education to secondary school due to lack of funds.

Esther’s mom is a teacher and single mother; her father is unknown. Taking care of Esther and her two siblings in Nairobi doesn’t leave her mother with enough money to provide for all of her children’s school fees. So Esther’s dream of becoming a doctor seemed far away. This is where Sarah, from Switzerland came in. Sarah decided that instead of buying the usual Christmas presents this year she would invest in a more lasting gift and support a young talent with a scholarship. She browsed through various profiles and handwritten applications of our applicants, all of them talented young people with not only great marks but also inspiring vision yet lacking the financial means to support their studies. For Sarah, Esther’s particular story spoke to her. That’s why she decided to award her scholarship directly to Esther – A great Christmas present for Esther, the future doctor. 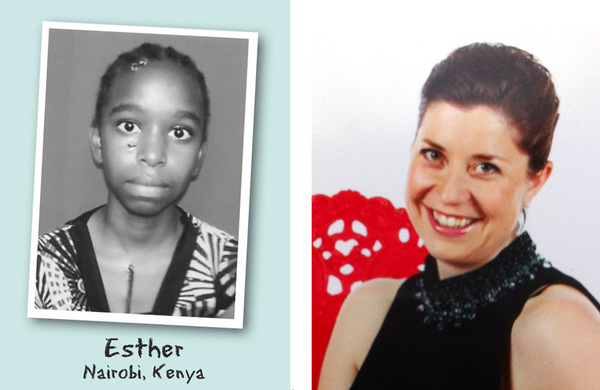 This 500th scholarship marks a very special step for Aiducation International. Since our founding in 2007 we have come a long way thanks to the help of our supporters, AiduMakers like Sarah, and a growing circle of friends, partners and sponsors. But throughout the years our core ideas and beliefs have always stayed the same – Education is the strongest lever to empower people, and independent and strong individuals are the best levers to positively changed societies. Bright and talented young people like Esther, have their countries future in their hands. Only they can make real, sustainable change happen. By giving them the chance to use their talents and fulfill their dreams, this potential is saved and not lost – for them and their whole society.

This same motivation moved Sarah to support Esther with a scholarship. “Education is, after all, the key to independence and self reliance, especially for women. Bright minds can indeed change the world! Following this motto I do hope that through this scholarship, Esther’s bright mind will be able to change and enlighten many more things in her country and beyond."

Marking today, already over 500 young and bright AiduFellows are on this path: they are part of a network that is actively changing not only their lives and the lives of their families and communities – they have already started to contribute to the economic, political, and social development of the whole country. Still there is a long way to go in supporting and many more young and bright teenagers who are lacking access to education. Yet these 500 are the first part of a network that consists of a new generation of leaders; they are bright and independent minds, the best of their class. They are educated and trained to give back, they care about others and are burning with desire to start something new, and to build a better Kenya.

Thank you to Sarah and all the other AiduMakers and partners for their continuing support.