THE ONLY THING WE DIDN'T LIKE WAS THE FOOD!

Christmas cookies of another kind: Take motivated talents, helpful politicians, and an enterprise which believes in making our world a better place wherever it can. .

Five years ago Lynda N and Obrein T. were selected as possible candidates for scholarships from Aiducation. They were in need of financial assistance and had ranked among the top 5% of their peers in the final exams of primary school. (Background information on school system)
Obrein, whose parents supported a family of eight with occasional jobs, wrote in his application that he wanted to become a Neurosurgeon. After working in that profession he wanted to eventually go into politics to help improve his country’s healthcare system (Link to Obrein’s application).
Lynda also wanted to become a doctor. To ensure that their two daughters could at least go to school, her parents had sold their small house. “I will serve my fellow humans, no matter what skin color they have or what ethnicity they belong to”. In addition, the positive girl felt responsible for fighting for the rights of young women and was particularly good when it came to the domain of science. (Link to Lynda’s application)

Both had worked very hard in primary school and had received excellent grades. The stroke of luck arrived when both received a scholarship for four years of secondary school. An aidumaker-couple from Dresden and a Service Club were convinced by the two applicants.

Obrein, who himself was without means, showed during the course of secondary school how important his country is for him. Together with friends he raised about 400 USD for fellow countrymen of a completely different ethnical background who were suffering from famine in 2009 (Link to the Newspaper Article). This was not the only thing he did however: During the last two years of secondary school, Obrein led a student organization working on environmental issues. The organization analyzed the use of dried cow dung for heating purposes. For his dedication to this cause, he was invited to attend a conference on climate change in London (Link to the Article).

Following a competition, Lynda was selected as the “Young CEO of Kenya”. She demonstrated her ability to coordinate large groups of people in 2009 at the Mentorship Academy of Aiducation. There, she single-handedly conducted a 100-person choir as they taped their christmas wishes.

The two did not only prove themselves in extra-curricular activities. In spring of 2011 they received their diplomas. Once again they got top results. Among the 20’ooo of the coastal region of Kenya who took the exam, Lynda managed to come in as the 51st (We reported on that, too – Lynda). Obrein too completed secondary school among the best 0.25% of his year (Obrein im Portrait).

Last month Lynda and Obrein were able to record yet another success in their young lives. Aiducators of Aiducation Internation UK worked hard and organized an internship opportunity for them in London. The Swiss airline Edelweiss Air kindly sponsored their flights to Europe. While Obrein worked for the Royal African Society, Lynda got a first look insight into politics. She worked for the British MP Pauline Latham and was able to attend real meetings of the “House of Commons”. “I learned a lot about the political system and have seen, that the ministers work very hard”, she said afterwards. “The public has a voice in England, and I like that” (Link to her Blog Article).

On her way home, Lynda was surprised to be seated next to none other than Matthias Meier, CEO of Aiducation International Switzerland. Matthias was on his way to attend the annual mentorship academy. His flight too was sponsored by this special enterprise which passionately bridges the gap between people and continents on a daily basis. 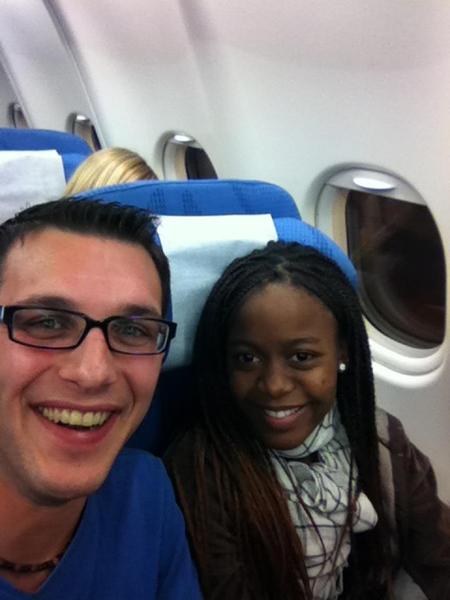 Lynda and Matthias on their way to Kenya

“Only the food was not to our tasting” both concluded after returning to Kenya. And one last thing these two promising youngsters have in common: Both will be starting to study law at the University of Nairobi in January. Best conditions not only for developing themselves further, but also for defending the rights of young women. We are keeping our finger’s crossed and will keep in touch.